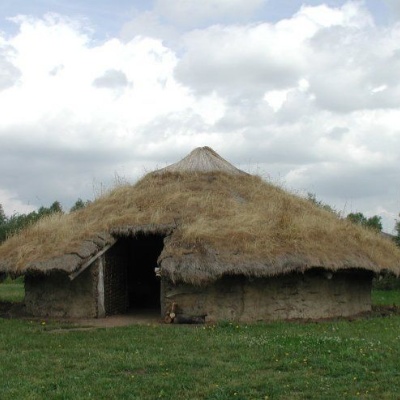 On Monday 17th September, everybody in year 3 went on a school trip to Flag Fen in Peterborough. We travelled on a double decker bus, which made the children very excited and eager to sit on the top deck. Why did we visit Flag Fen though? Flag Fen is an archaeology site where artefacts and ruins from the Stone Age through to the Bronze Age have been discovered.

When we arrived at Flag Fen, our tour guides, Alex and Jay, were waiting to greet us. We gathered on the grass and were told how Flag Fen got its name. 'Flag' represents the yellow flower - which blooms in the spring and 'fen' means flat land.

We wandered over to a classroom building where we stored our coats and lunches for later on. Whilst inside the classroom, Jay explained the history timeline and how we fit onto it. We looked at the Stone Age, Bronze Age, Iron Age and Roman invasion placements along the timeline. It was very interesting to see how long the world has been around for and how little a time humans, as we know, have been on earth for.

Afterwards, we had a tour of Flag Fen. We marched along a Roman Road and learned about Boudicca and how she tried to fight against the Roman Invasion. We found some stinging nettles and discovered that people in the Stone Age used to eat stinging nettles and make clothes out of them too! They also made clothes out of reeds beside the water and animal skins during the winter.

We were allowed to sit inside a replica Stone Age boat that would have been used to trade and catch fish in. We had a look at a part of a bridge that was used to deliver offerings to the Stone Age gods. Archaeologists know this because a lot of artefacts and objects have been excavated close to the parts of a bridge. Alex told us that what we saw there was part of a larger bridge about the same size as Wembley Stadium. It didn't look that big in real life though. That's because it is slowly disintegrating and disappearing. It is likely that in 40 years, it won't be there anymore.

Before lunch, we walked over to the Round house and had a look inside it. We sat around the outside of it in a circle and Jay lit the fire in the middle. We were very careful and listened carefully to a legend that Alex told us. At the end, she showed us a shiny, silver sword with the body, head and mouth of a dragon on it. We were allowed to touch the sword and make a wish as she passed it around. We all hope that our wishes come true!

It was very important to wash our hands before we ate our lunch because we found some sheep wool and had a feel. We didn't want to make ourselves poorly.

After lunch, we marched over to a hut in the middle of Flag Fen. Inside, we were shown how to make clay pots just like the Stone Age people made. We used shells, string, sticks and our fingernails to make engravings on the outside. Mrs Emerton had lots of fun and found it very therapeutic. It was so messy though, we needed to wash our hands again!

Later on, we had a go at sorting through some artefacts from the Stone Age. We had to make sure that we were very gentle with them and hold them carefully because some of them were over thousands of years old. We didn't want to break them because they are irreplaceable. We needed to work together to decide whether they came from the Stone Age, the Bronze Age or the Iron Age and think carefully about what we think they were used for. Some were tricky to decide because they were used in all 3 periods.

When it was time to go home, we were all very tired but very sad too. We had had so much fun learning about the Stone Age. A lot of us want to come back and show our Mums and Dads what we had learned that day.

Thank you Alex and Jay for teaching us loads of wonderful information.